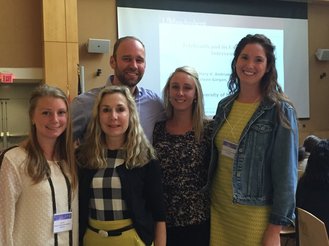 Massachusetts Act Early on No Small Victories Radio - Tune In! 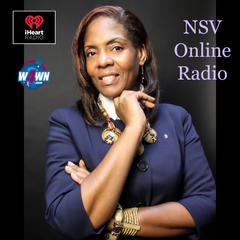 MA Act Early State Team Leader and CDC Act Early Ambassador Elaine Gabovitch spoke on March 23, 2016 about the work of the Massachusetts Act Early program and the CDC’s “Learn the Signs. Act Early” campaign with state team member Jacqueline Williams-Hines who is the president of the nonprofit No Small Victories and the host of NSV Online Radio.

Listen to the archived broadcast here.

NSV Radio has new autism-related broadcasts live on the W4WN Entertainment Network every Wednesday night at 7 pm and archived on iHeart Radio. 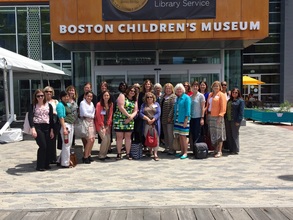 On June 16th and 17th, 2015, the MA Act Early state team and the HRSA State Autism Planning Grant team collaborated with AMCHP on a two-day event: The 2015 Spring Summit on Considering Culture in Autism Screening and Systems of Care and the AMCHP SPHARC 2015 Peer-to-Peer Exchange. Held at the Boston Children's Museum, 56 professionals from seven states (CT, IA, MN, MA, ME, NH, and VA) came together to brainstorm and problem solve educating parents from culturally and linguistically diverse backgrounds about healthy developmental milestones in young children and reducing early identification barriers for autism and other developmental disorders.

The meeting included a training on the Considering Culture in Autism Screening curriculum, a panel on outreach to educate culturally diverse families about developmental milestones, sharing strategies and models of intervention, and creating action plans inspired by the wisdom shared from the states' efforts.  Summit and P2P presentations, materials and more information about the event can be found ﻿here﻿.

The full summary report on cultural screening barriers and solutions can be found in Materials and Resources. 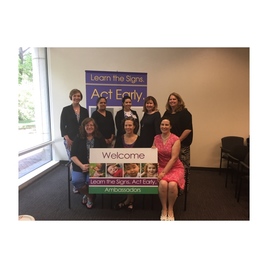 On May 20 and 21, 2015, seven Northeast Act Early states met in Hartford, CT for the 2015 Northeast Regional Act Early Conference on the topic of Developmental Screening, Referral and Response. The overall goal of the conference was to exchange national and state information on developmental screening, referral and response to referral and to use knowledge to enhance state autism plans. The agenda included presentations from national experts and state participants, state action planning and networking opportunities. This event was organized by the Learn the Signs. Act Early. Ambassadors from Connecticut, Maine, Massachusetts, New Hampshire, New Jersey, Rhode Island and Vermont, with funding from the Association of Maternal & Child Health Programs (AMCHP), Connecticut Department of Public Health and Rhode Island Department of Health, along with support from our national partners: Health Resources and Services Administration, Association of University Centers on Disabilities and Centers for Disease Control and Prevention (pictured above).

All conference materials, presentations, and more information may be found on the AMCHP web site.

The webinar Developmental Screening in Massachusetts: An Alliance between Early Childhood Educators and Pediatricians was offered to pediatric providers for continuing medical education credit through December 2015. Developed by UMass Medical School-E.K. Shriver Center in partnership with the Massachusetts Department of Early Education and Care and the United Way of Massachusetts Bay and Merrimack Valley, the webinar shared information about how early childhood education programs are conducting developmental screening by using the Ages & Stages Questionnaire screening tools to monitor development in young children in community settings.

“Tracking Milestones: Act Early to Improve Outcomes” written by Elaine Gabovitch was featured on page 25 of the Boston Parents Paper's 2014 annual special online issue of "Your Child With Special Needs" and highlights info from “Birth to Five: Watch Me Thrive!” and “Learn the Signs. Act Early.” programs, as well as from our own Massachusetts campaign.

UMass Medical School autism advocate Elaine Gabovitch, MPA, joined New England Cable News on Friday, Oct. 3, 2014 to discuss the importance of celebrating and tracking developmental milestones in children. Gabovitch participated in the "Amazing Me! It's Busy Being Three.” event at the Boston Children’s Museum on Oct. 5, 2014.

Elaine Gabovitch, State Team Leader of the Massachusetts Act Early state team and UMass Medical School-E.K. Shriver Center LEND faculty has been reappointed to serve as the CDC Act Early Ambassador to Massachusetts for another two-year term from May 2014 through April 2016. During this time, she will reach out to potential state team partners to continue to broaden the state's infrastructure for early identification for children at risk for autism and other developmental disorders. She will host at least one state team meeting per year using part of her Ambassador funding to support the state team network.

Two new grants have been awarded for MA Act Early projects that will help sustain the state effort.

Awarded by the Deborah Munroe Noonan Memorial Research Fund, a BankofAmerica, N.A.Trustee, from September 2013 through October 2014. The goal of the proposed demonstration project is to develop, implement, and evaluate an educational module that trains pediatric providers in culturally competent screening, evaluation, and referral to intervention services for children with autism spectrum disorders (ASD).  The project will expand on the Considering Culture in Autism Screening guide and kit that the  MA Act Early multicultural project team developed for pediatric clinicians in early 2012 under a Association for Maternal and Child Programs (AMCHP) grant.

The project teams will include:
Click here to read an article published by UMassMed Now about the project.

The Healthy People 2020 Roadmap for Massachusetts Children and Youth with ASD/DD: Understanding Needs and Measuring Outcomes

Awarded by HRSA-MCHB from September 2013 through August 2015. The two-year project will address a state priority in the 2013 Massachusetts Autism Commission report to develop a comprehensive statewide approach to address the needs of MA children and youth with autism and developmental disorders by implementing consistent statewide data collection practices. The project will: (1) assess state needs of children with ASD & DD that align with the MCHB Healthy People 2020 indicators, (2) refine a state plan to address identified needs; and (3) outline an evaluation plan and program surveillance strategy to monitor and report on state ASD/DD activities and outcomes in the future. The plan will focus on underserved children and youth by race, culture, language, immigrant status, region, transition age, insurance coverage, level of function, and mental health status. The core indicators for review will be: screening, medical home, access, family involvement, transition, and insurance.

The project team will include evaluators from the Center for Developmental Disabilities Evaluation and Research (CDDER); Elaine Gabovitch will serve as the PI/Project Director. The 20-plus member Project Advisory Board includes representatives from leading state agencies and several members of the MA Act Early Steering Committee.

Pediatric Provider Survey Coming Soon to an Email InBox Near You!

Dr. Roula Choueiri of Tufts Medical Center and the Early Identification task force recently developed and launched a Pediatric Provider Survey to better understand autism screening practices in Massachusetts and to conduct a needs assessment in pediatric primary care. Over 1,600 pediatric providers across Massachusetts received emails in August and September inviting them to take the survey. For successful completion of the survey, respondents  received a new "Autism and Developmental Disorders Diagnostic Services" listing developed by the Early Identification task force this past Spring.

Pediatric providers in Massachusetts are strongly encouraged to fill out this brief, confidential survey.  This is an important survey that will be useful on a number of levels for understanding screening and detection practice in Massachusetts.  We will share the results on this web site in the future. To access the survey, the link is: https://www.surveymonkey.com/s/pedscreening.

Want to learn why early identification is so important to the members of the MA Act Early state team?  Several of our members were "guest bloggers" on New England INDEX's disability blog during Autism Awareness month.  Topics include:

In collaboration with the UMass Medical School Department of Psychiatry and the Autism Resource Center of West Boylston, MA Act Early co-sponsored this year's annual Autism Speaks "Light It Up Blue" event  at UMass Medical School on April 2, 2013 in observation of World Autism Awareness Day.  Familes and providers in the Worcester area are invited to attend the event which will  include a service provider fair, updates and information about autism related initiatives including the Massachusetts Act Early program, the final report & recommendations from the Massachusetts Governor's Commission on Autism, and an announcement of the new Center for Autism & Neurodevelopmental Disorders (CANDO) Clinic opening at UMass Medical School this spring. A screening of the HBO film "Autism the Musical" will be followed by the lighting of the UMass Medical School building in blue. 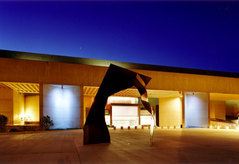 In the western region of Massachusetts, the UMass Amherst student organization "Autism Speaks U" hosted a talk and book signing by John Elder Robison, lit up the fine arts center in blue, and hosted a charitable 5k run/walk to benefit Autism Speaks.  On evening of April 1, 2013 in the UMass Amherst Campus Center Auditorium, John Elder Robison, author and person with Asperger syndrome, shared his extraordinary stories and insight about living with Asperger syndrome.  On April 2, 2013, the Autism Speaks U hosted "Light it Up Blue!" at the Fine Arts Center . The race/walk took place on Sunday, April 7, 2013 at Kendrick Park in Amherst Center. Prizes were awarded to the top finishers and the top fundraisers. Also featured at the event were a family-friendly 3K Walk, information on autism, entertainment, food, refreshments, and a raffle. 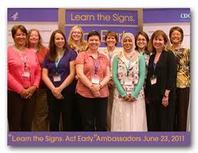 Effective January 25, 2013, the Association of Maternal & Child Health Programs (AMCHP) has reappointed MA Act Early's State Team Leader Elaine Gabovitch to serve as the CDC Act Early Ambassador for Massachusetts through April 2014. During the 15-month commitment period, she will: (1) promote the goals and objectives of "Learn the Signs. Act Early" (LTSAE) to improve early identification of autism and other developmental disabilities, (2) serve as a state point-of-contact for the national LTSAE program (3) support the work of the MA Act Early Team and (4) promote the “Autism Case Training: A Developmental Behavioral Pediatrics Curriculum.”  She joined 25 other new and returning ambassadors from across the county to attend an Act Early Ambassador's training on March 7 & 8, 2013 at the Centers for Disease Control and Prevention in Atlanta, GA.

The new online Autism Case Training (ACT) course covers the fundamental components of identifying, diagnosing, and managing autism spectrum disorders.  Three modules, which can be taken separately or together, are based on real-life scenarios and include up-to-date information, illustrative videos, and pertinent references and resources. Free continuing education credits (CME, CNE, and CEU) are available for each of the modules.

The MA Act Early "Considering Culture in Autism Screening" guide and toolkit includes a clinician's tips guide, our "Referrals at a Glance" Massachusetts resource sheet, and the validated M-CHAT screening tool in five languages along with instructions, a scoring sheet and the follow-up interview.  Please visit our Considering Culture web page to access this free product for pediatric clinicians and community health providers.